Though research on the rise of domestic violence during the World Cup is relatively new and for lack of a better word, sparse, the trend is alarming and impossible to ignore. The weather is getting warmer, more drinks will be consumed, emotions will be heightened, and none of this excuses violence. We ask that individuals and organisations stand together this World Cup season and say ‘No excuses’.

There are many ways to do this.

* Send the graphic to local news outlets in your area. Coverage is key to getting this issue the attention it deserves.

*Donate to support Healthy Relationships education. It is imperative that we continue to support young people’s right to healthy relationships by running workshops to help provide them with the skills to identify early warning signs and support.

* Ask your friends to get involved. Write blogs. Write op-eds. Contact the networks covering the World Cup. Let the media know that this is an issue you want raised.

* Get familiar with local support for victims of abuse. Being able to signpost friends or neighbours when they disclose can save a life. The 24 Hour National Domestic Violence Helpline is a good place to start: 0808 2000 247

Remember, it doesn’t matter whether your win or lose. There are no excuses for domestic violence. 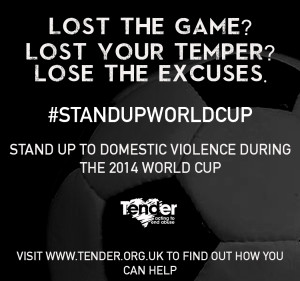 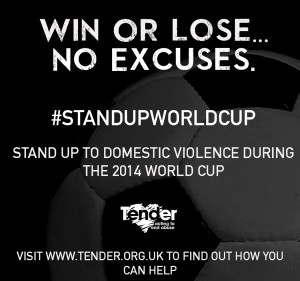